Build a network using the JOINER Services platform and boost your career as a self-employed robot programmer.

OR +2 YEARS OF INDUSTRY EXPERIENCE 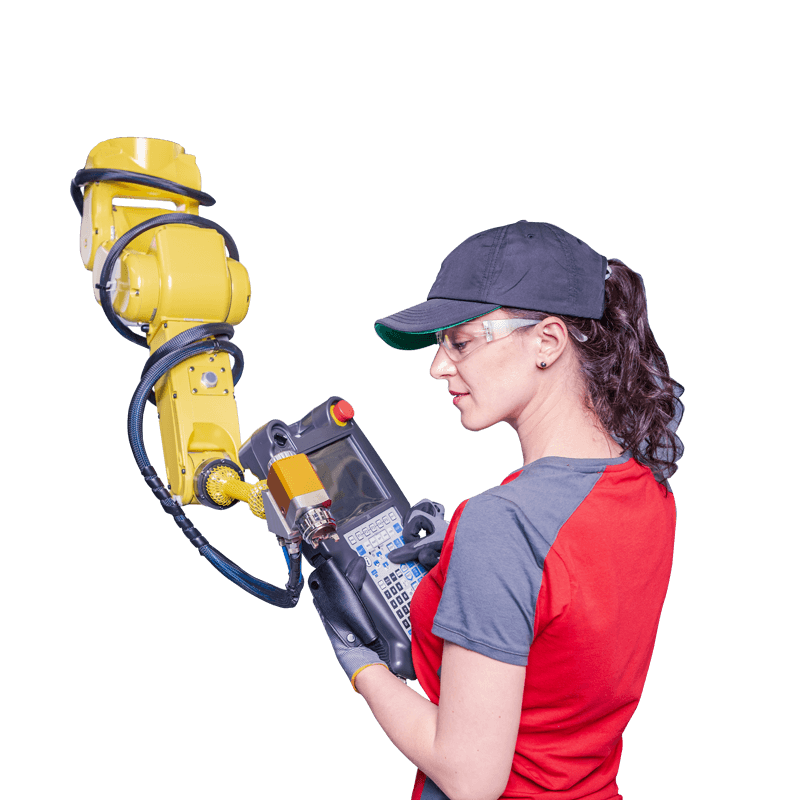 You will be responsible for the client’s robotic programming projects.

Our robotic programmers must have some experience with programming the most common industrial automated systems:

It may be beneficial to have experience with collaborative robots:

Robotic application experience with the following:

Robot programmer jobs listed in our engineering service platform are available for engineers with the specific application skill or robotic systems experience requested by the client. In addition, as robotic automation increases in manufacturing, the demand for experienced contractors, who understand how to program an industrial robot, will be abundant.

At some robot programmer jobs, contractors may be asked to assist the client with designing robotic cells or robotic systems. They must understand how the robot works and envelops the manufacturing layout. It is the engineer’s job to understand the industrial robot’s general movements to help the robotic application’s machining workflow. Often, they act as a computer programmer, doing offline programming to help with the design engineering of a cell layout.

Understanding the movements of the robot is critical. A robotics engineer may work with a software engineer to pre-install automation simulations. An offline robot program can be created and tested in simulation before integration into the assembly line. These simulations will use some artificial intelligence to create the best robot paths for the application.

After an industrial robot is installed and software is downloaded to its interface, the robot paths must be created and touched up according to client specifications. A robotics engineer or robotics technician will be responsible for ensuring the robotic system is functioning correctly. During this commissioning phase, the robots must be run slowly in a cell, so they do not crash because the proper zones, fixtures, or tooling may not be in their final location.

A robot programmer’s main job is to ensure the robot does not crash into people or objects. These safety zones can be created by having the engineering professional set up interference zones to keep the client’s machine safe. Interference zones are safe and unsafe areas where and when a robot can work during the automation process. The robot system can be hazardous if these safeguards are not met in any part of the automated process.

Every robot programming job description will mention cycle time. Every robot must operate as efficiently as possible, and the robotics engineer’s job is to ensure this happens. Each robotic application and robotic systems are different, but improving cycle time in the robotics field is a skill that must be learned. The robot programmer’s job is to make sure that they adjust points, movements, and motions to be as rapid as possible to achieve the quickest program possible.

Contract robot programmers may have to train a client’s robot technician staff or other engineering employees. These engineers must prepare the organization for the robot programs and the complexities of the robotics technology. The best way to learn how to program a robot is through hands-on training programs created by a contractor or by shadowing a robot technician to understand the daily issues seen on the assembly line. 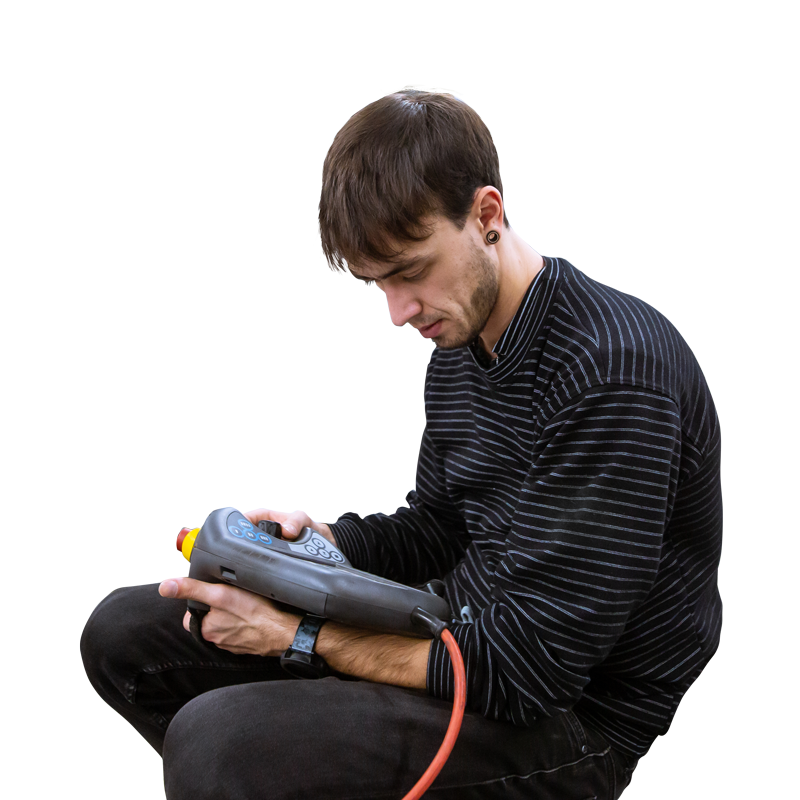 Check out this video!

Automation is the key to increased production and profitability, and robot programmers will get a high salary.

A contract robot technician with controls engineering, electrical engineering, or joining engineering knowledge could reach over $100,000 in annual earnings.

As a contract robot programmer, rates can be per project depending on the worker's experience, technical skill required, and project location.

The current average salary of a robot programmer is around $75,000 a year. 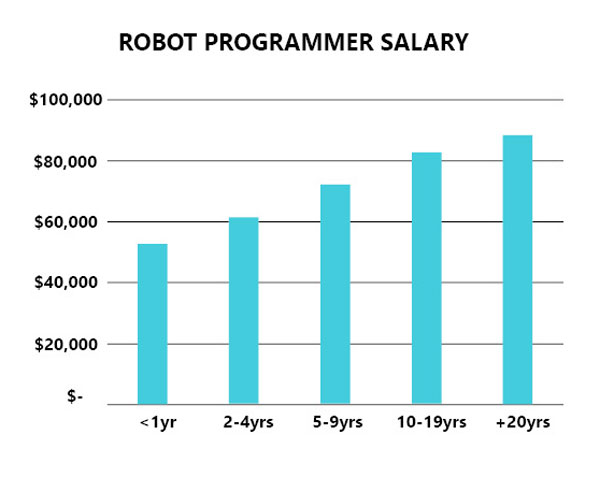 Expectations As A Robot Programmer:

Programmers must also act as robotics software engineers because they need to understand the background logic of robotic systems. As a robotics software engineer, the programmer has a good comprehension of performing memory backups, uploading data to the controller, and communicating inputs and outputs with programable logic control engineers. Robotics engineers must also deeply understand the computer science behind the sophisticated background information in the macro programs.

The robot programmer’s job is to develop a robot maintenance schedule to ensure its equipment’s longevity. An industrial robot needs to have a regularly scheduled maintenance plan so that parts will not become worn out and need replacement or major repair. The contract robot programmers are often responsible for understanding how to fix or replace damaged robot equipment. This may not be in a job description, but it is a part of good customer service that a contractor can provide for a client.

Programming robots is a fun profession similar to playing video games. These engineers develop paths, and tasks for the robot programs, while trying to reach the client’s targeted cycle time. A robot programmer will be responsible for programming, debugging, troubleshooting, and preparing industrial robots to meet the client’s specifications. They will also develop these robot programs from scratch and interface the robot with a PLC system.

In any robotic automation process, contract robot programmers must ensure all specifications and requirements set by the client are met. This includes robot safety and keeping all workers safe when in a robot cell. They must ensure that some quality control measures are satisfied with the applications and products used in the automated system. 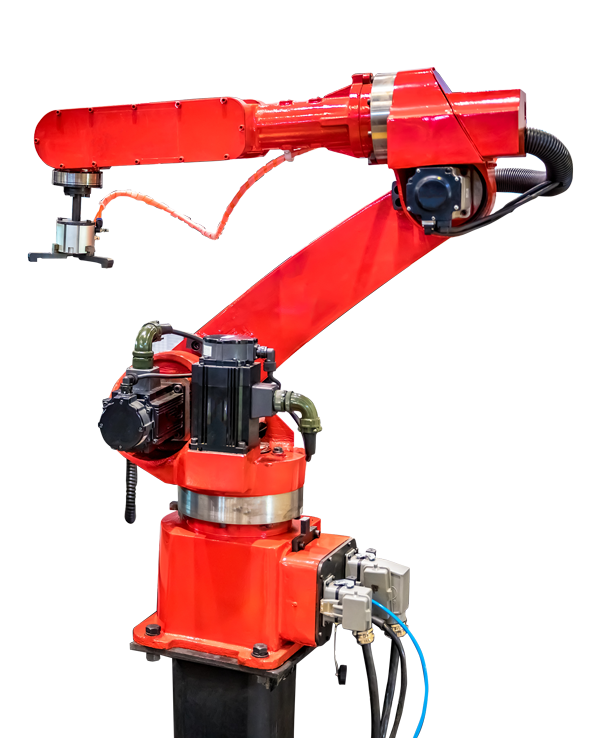 
Check out our articles